Enchantment. I hope the word sends a thrill up your spine! When was the last time your conversation turned to enchantment? Who talks about enchantment these days? That may be one of the reasons it interests me. As a writer, I’m interested in what isn’t being said in the public sphere—the unsaid and the unspoken.

The German philosopher Wittgenstein explored the subject of enchantment.

And yet we seem so attracted to enchantment’s opposites—cynicism, irony, mistrust—qualities that show up in lots of contemporary fictional characters who reflect our twenty-first century discouraged and disenchanted point of view. Enchantment, instead, would have us stand in the place of wonder and consider ourselves apprentices in the mystery of Being.

and how the enchanted state in a writer, in this case me, seeps into the work itself. Another way of saying this is that what’s in the psyche of the writer shows up transmuted on the page. Transmuted is key because sometimes only the slightest aroma of the original idea is evident in the final written form. Think of it this way: The rapture expressed in Mozart’s The Magic Flute is directly related to the rapture Mozart presumably felt while composing it. If Mozart was filled with rapture, rapture will be in his music.

Have you ever felt unaccountably drawn to a city, country, or continent you’ve never visited before? Have you ever journeyed to a foreign, unfamiliar place and yet felt perfectly at home? I’m just back from a mini-book tour of Georgia and wondering about these questions. This is one of the very great things about being a published and public author: not only do I get to meet readers and future readers, something I love to do, but I’m traveling to parts of this country I might not have gotten to visit otherwise—New Paltz and Woodstock, New York (Yes, THAT Woodstock!); Nashville, Tennessee; Athens, Georgia to name a few.

Georgia charmed me. What a flirt! Even with her dirty face and smeared lipstick, she was all soul. My plane touched down in the dusky Atlanta twilight, and after an endless, color-deprived Wisconsin winter, the first thing I noticed was the glorious lushness of the landscape. Every shrub and sapling seemed to be flowering, and the scents intoxicated. Ancient willows and huge old oaks sashaying in the wind were the trees in the childhood fairy tales books I wished to inhabit. I might be romanticizing here, but it was hard not to fall in love with Georgia.

Georgia seduces you with her melancholic, regal and faded glory. 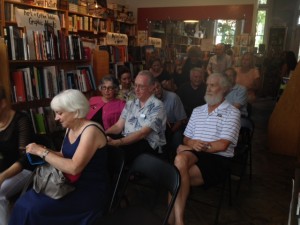 We know she lost the Civil War to us damn Yankees; we know internally she still carries herself like a queen and we can’t forget that once she ruled like a queen, but now Georgia is everywhere diverse, a stew of the peoples, and diversity—of ethnicities, genders, ages, and incomes—certainly gives a place soul. Maybe losing a war and burying a way of life along with the dead makes for a kind of graciousness and humility wrought out of sorrow we Midwesterners can’t quite know.

This is all speculation on my part, of course, but when I think of Georgia now I see the South of Alice Walker and Carson McCullers, the grand and not-so-grand houses with their commodious porches where the elders rocked and waved howdy to their neighbors. Those porches still exist as do the friendly and welcoming howdy-dos.

Friendliness was in the atmosphere from the moment we checked in near midnight at the Athens Marriott Courtyard. The jovial desk clerk was not only unfazed by our late arrival, she proudly gave us details to AthFest, Athens’ yearly music festival and street fair occurring that weekend. With a hug, she sent us to bed.

I’m a hugger (including a tree-hugger!) and a hand-holder and have been known to give near strangers an affectionate kiss, so I fit right in with the local custom of appreciative smooches and cheek-pecks. Hmmm—how to say this? Are Southerners more erotically (as in Eros) connected than the rest of us?

I’m also happy to report friendliness took the form of genuine enthusiasm for The Conditions of Love, a novel set in the Wisconsin that has nothing Southern about it. Janet Geddis, (owner), and Rachel Watkins, (events coordinator and local politco), and staff at Athens popular Indie bookstore Avid Bookshop (with help from new writer friend Sara Baker, and Janna Dresden and Ron Cervero), did a fabulous job of pulling in an enthusiastic group who might have otherwise skipped off to hear a band at AthFest. Those of you who know me know how much I love to talk about books, writing, and the creative process with audiences, and the folks who showed up at Avid’s were both wonderfully attentive and great question-askers. One question that I’m often asked, and was asked in Athens, is what motivated me to write fiction after studying to write poetry. The answer is definitely a blog-post in the making!

In Atlanta, I stayed at the historic Inman Park B & B and was hosted by the ever-hilarious Eleanor and her heartthrob, Bob the Duck. (No kidding!) Inman Park is the place to go if you’re interested in historic mansions. Right around the corner from my B & B was Windcrofte, the spectacular mansion once owned by the Woodruff family of Coca-Cola fame.

My friend from VCFA graduate school days, Liza Nelson, brought out the crowd at A Cappella Books. I’d promised event coordinator, Courtney Conroy, I’d bring genuine Wisconsin cheese curds (the brilliant idea of my local PR maestro, Danielle Dresden) to lure an audience. Who would have guessed that the humble and unsophisticated cheese curd is exotica to Southerners?

Charis Books in Atlanta, one of the oldest feminist bookstores in the country, where I signed a few copies of The Conditions of Love, also rolled out the welcome mat in style.

Merci and gracias to all including Marti, owner and chef of Marti’s at Midday in Athens, closed for lunch the day we arrived at her door. Nonetheless, the ebullient Marti ushered us in, showed us around, then after a firm embrace sent us to chow down at another local wonder, The Grit.

I conclude that I must return to Georgia to further explore its memorable juju of hospitality, warmth, and soulfulness. Does a place reflect our inner world? Can we find out more about ourselves by investigating certain places? I think so. A great deal of our identity is tied to place, but we are so much more than our hometown selves. In the past, I haven’t been a reader of travel memoirs. Now I may become one. Book suggestions?

When I was first starting out as a poet, I discovered Writer’s Relief. Ronnie Smith, the founder, was exquisitely aware of how writers often work very hard on something and then procrastinate in sending the piece out for publication. What she and her staff formed was an agency that did all the dirty work for writers. Writer’s Relief is now celebrating its tenth year, and if you check on their website you’ll see what a fantastic boon for writers it has become including great free advice on their blog, video tutorials, and a free publishing toolkit. They stay loyal to their clients. They were kind enough to do a shoutout on their Tumblr blog when The Conditions of Love was first published last year.

The WR blog currently features a Q&A with me about the process of writing. I always wonder when I do these interviews if anyone reading them will actually find them helpful. I try to offer tips I’ve actually find useful, and ones you won’t find in most writing advice columns. Here’s one I doubt you’ll find in any book or blog on writing:

Have a sangha, the Buddhist word for a place of refuge. Cultivate a group of friends who love and support you and who understand the challenges of your writing life. Make sure you can belly laugh with them too. A good minute of belly laughing does wonders for the creative spark.

I have found that “recharging” with friends has often been critical to staying healthy and sane. And there are four more suggestions I hope will provide comfort and support to a writer somewhere. One fun aspect to this interview: Writer’s Relief is giving away a free copy of TCOL to one lucky reader who comments or asks me a question on the blog before June 11. Check it out and let me know what you think. You could be the winner.

I just met the wonderful Susanna Daniel several weeks ago and am completely humbled and delighted by the great things she’s saying about The Conditions of Love.  I haven’t had a chance to read her just released second novel, Sea Creatures, but when I do I’m sure you’ll hear from me about it.

Susanna kindly included The Conditions of Love among the books she cited on Marshall Zeringue’s delightful Writers Read blog:

I’ve just finished Dale M. Kushner’s broad and impressive debut novel, The Conditions of Love, and I’m stunned – stunned – that I’m not hearing about it every time I pick up a newspaper or open a browser. It’s a classic, sweeping story of a girl’s life and the relationships that define her, from birth to old age – exquisitely detailed, finely paced, deliciously ambitious.